When corporations create brand identities, they design and craft symbols that represent their lines, business or philosophy. The result is a differentiated visual identity that both enhances how these corporations are regarded; as also acts as a receptor of all perceptions about the corporation. Eventually, the symbols get so loaded with meaning, that a single glance at them unlocks defined associations in the minds of the viewer.

The design sophistication, choice of colour and the elegance of crafting all add to the power of the symbol and add elements of professionalism, quality and trustworthiness to the overall corporate brand.

The political symbols in India are handed out by the Election Commission – and at best are chosen from the repertoire on offer. 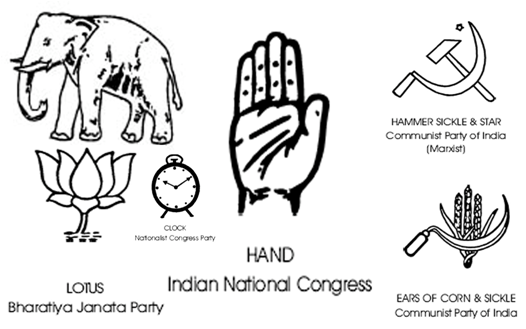 There is little scope in design (some of the symbols are used in colour as well), but the opportunity for the symbols to have a deeper meaning is certainly present.

Apart from AAP, and for the first time in a small way – Congress; no other party has used their symbol to describe or further their philosophy and manifesto.

The AAP uses the broom as a symbol of sweeping the country clean. Clean politics and governance is, after all, what they stand for. They even enter communities sweeping the roads and pavements, thus unequivocally defining what they stand for in a very powerful way. They have used their symbol well to further strengthen brand AAP and what it stands for.

Congress on the other hand has a slogan – ‘har hath shakti, har hath tarakki’  which is the only way in which the hand symbol is reinforced. A micro-study to understand how people interpreted the Congress hand elicited associations ranging from positive (sign of blessing) to negative (stop sign, ‘heilhitler’) to neutral (salute).  The Congress could do well to imbue the hand with more meaning. A caring caress, a friendly handshake, a lending hand of help, a shielding hand, a blessing hand – the hand itself could come alive in many ways. If the hand symbol was strengthened such that ‘whenever you see a hand, think of Congress’ (to paraphrase a powerful Jensen & Nicholson campaign from the ‘80s); the Congress brand recall would go beyond just the specific election symbol to an actual hand or even a moment of nurture, help, blessing or protection.

The BJP symbol of lotus is one of the most auspicious symbols for abundance, wealth, purity and sacred. At this point, it to has simply remained a visual mark. The wealth of meaning intrinsically contained inthe mark is not unlocked by linking it with the party philosophy or ideology. BJP could use the symbol to tell a story of prosperity or for that matter even that of clean and pure politics in the dirty landscape of their competitors.

A symbol has to be loaded with meaning – else it remains a picture. It has to reflect the actions, attitudes and beliefs of the organization it represents. Political parties can do much to create a living brand by making their symbols come alive.