On 16th of May, 2014, when it became clear that Narendra Modi, known to the nation as the man behind the progress of Gujarat, has led the BJP to a historic victory (the party has won 282 seats itself, a first since Congress’ win in 1984), even the ones who had predicted the victory for him were surprised. No one could’ve anticipated such a landslide win. No one. Well, except for the think tank who strategized Modi’s campaign and made him more than just an authoritative political leader. They made him into a brand which resonates strength and a freshness which the voters thought should be made the representative of a new India.

Personalizing a political campaign is nothing new. Obama’s historic victory in the 2008 US presidential elections is a prime example. What was unique about Modi’s campaign is that not only it put forth Modi forward as an iconic leader but also built an image of him that is so great that it surpassed the reputation of the political party that he was a representative of. And the more interesting factor is that all of it was intended.

Creating a strong brand presence isn’t easy by itself. But creating a brand presence which is trying to break away from a tainted image is even harder. The BJP had employed the best of the best in concocting and applying their media strategy. Household names such as Piyush Pandey and Prashoon Joshi led the campaign. They brought in well known agencies which developed themes and concepts which aided the one specific message that the campaign was trying to communicate to the voters. Growth and development.

By decoding the colours Saffron and White which consequentially transcendent into strength and purity, the campaign through its visuals gave out an impression of stability.

The message was clear. But what separated it from rest of the political campaigns so far is the unique way in which the same message was delivered to different segments of the voters by customizing the approaches. The youth had been specifically targeted. The reason being that they make up for largest no. of voters in the country. With exhaustive social media campaigns with hashtags such as ‘#NaMo’ and taglines like ‘Ab ki baar, Modi Sarkaar’ which went viral it was ensured that the voters are not only aware of Modi as a brand but also they’re interacting and engaging themselves in the digital environment with the brand’s presence which later inevitably transfers itself to the outside world.
This was only just a small part. Corporate leaders backed Modi, during his public addresses and this in turn translated into the hope of strategic and sustainable development. This particular campaign saw some commendable innovations in BTL promotional activities. With campaigns such as ‘Chai pe charche’ and etc. that particular segment of the voters who are by nature media ignorant were targeted. Places where the aggressive print ads, radio jingles and TVCs could not reach, trucks loaded with Modi posters, pre-recorded speeches, speakers and lights were sent out. Even 3D hologram images of Modi were distributed. 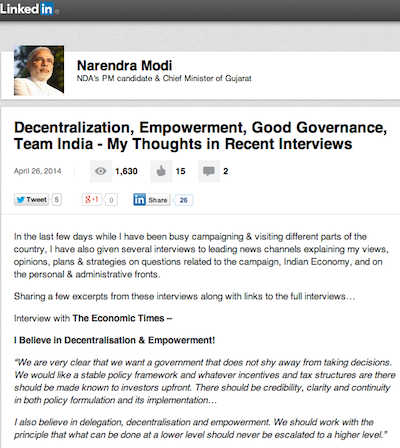 The result was an impeccable brand identity which was not only difficult to ignore but also difficult to resist. If one were to judge all the global brands based on their irresistible quotient one would find that there are a couple of general traits all of them qualify for. It normally depends on their credibility as an expert in their fields, their forward thinking in staying ahead of their competitors, their unique positioning in the market and their strong connection with their consumers.Brand Modi was everywhere.

Another important tactic that helped Modi in creating a powerful brand presence is the understanding of what the voters needed and filling that void with something which is appealing and the only other option. The team behind Brand Modi had considered time. They had started early, long before their opponents were not even sure about how to approach the campaign and spoke in a language which was easily understood and appreciated. 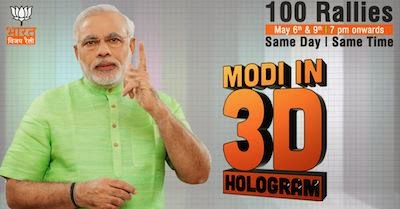 It is difficult to convince a customer their consuming patterns.  Be it the haircare product that they have been using for the past decade or the government that has been in charge of administration for nearly the same amount of time.It is hard to accept change. But Modi’s strategy was not only to convince his voters to accept change but also to initiate in them the need to want change. A brand’s strength is also perceptible to the fact on whether the opponent is strong or not. The Congress came across as indecisive and meek. Modi’s campaign taunted their opponents with this factor as well with campaigns such as ‘Janta maaf nehi kargei’.

The success of Brand Modi is a case study in itself. The BJP put him forward as their representative and eventually he gained an identity of his own which has well surpassed BJP’s influence. Modi, who started the race as the ambassador of a political party, ended it with becoming as the ambassador of a nation. He now brings forward a brand that is at once visionary, inspiring and irresistible.

By
Nandini Chandra,
Intern - Content Development,
DY Works
Posted by Unknown at 4:33 AM