With India Gate in the background, Anand Mahindra on Monday launched the e2o, pronounced Etwo-OH- taking a familiar path for the automobile maker with a penchant for names ending in O.

All of Mahindra's model names - whether it's the SUVs like Bolero, Scorpio, Xylo, or even the XUV 500, pronounced as five double oh, or the company's two-wheelers Duro, Rodeo, Stallio and Pantero have the same ending.

Pawan Goenka, president, automotive and farm equipment sector, Mahindra & Mahindra, says after the success of Bolero and Scorpio, the company thought the 'O' at the end of the vehicle was lucky and decided to stick with it.

"You can call it a bit of superstition, but it has worked for us. It has become a tradition for us and it is now an expectation from M&M to follow that practice. Thanks to this, people easily identify an M&M product," Goenka said.

While it is a conscious decision on part of M&M, Japan's largest two-wheeler maker, Honda Motorcycle and Scooters IndiaBSE -4.88 % (HMSI) stumbled into ending all its product names with "er". Honda's motorcycles all have seven-letter names — Twister, Stunner, Dazzler, and it will soon launch a 150 cc motorcycle called Trigger.

Brand experts say having a structured nomenclature system for a portfolio is a good strategy for automakers and it helps companies reduce its marketing spend.

"Having synchronicity in a way the brand names are pronounced makes it easier to remember. M&M's product names are easily identifiable and remembered over different sounding brands of say a company like Ford. But I am not too sure, if it is a good strategy to apply the same in two-wheelers as well," said Alpana Parida, president at DY Works, a leading brand consultancy. 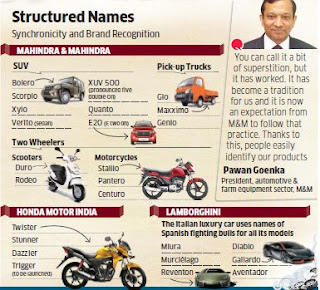 Interestingly, for HMSI, the non-ER ending products like Activa, Shine and UnicornBSE 0.00 % are all successful models, and contribute a major part of volumes.

And some people associated with Honda have suggested that the company switch from an "er" ending to names that end with "a" - citing the Activa's success as support.

Yadvinder Singh Guleria, VP sales and marketing, Honda Motorcycle and Scooters India, says it's just a co-incidence that so many Honda vehicles have the same sound. "It's the ultimate dream for a marketer to have one brand identified as the entire category — like we did with Activa in the automatic Scooter space. Names are decided based on the characteristics of a vehicle, it should sound easy and should not have a negative connotation in any language," he added.

With over a thousand model names in the Indian personal vehicle space, and 50-60 new models launching every year, finding a brand name that breaks the clutter is extremely tough. Brand consultant Harish Bijoor says naming auto brands is a mix of logic and neuroscience.

"It is an industry where product is forever on the move, so one should have actionoriented names. Companies need to build in ubiquity and emotional value to the brand. MarutiBSE -0.53 % is the only one that has managed to build it and Mahindra is moving in that direction," Bijoor feels.

He also feels that anything ending with an 'O' is easy on the tongue and two-syllable, four-letter names are the best.