For those who have seen it carefully, the new brand campaign for Frooti reveals a subtle shift. It shows the newly signed brand ambassador Shahrukh Khan glugging the mango drink from a PET bottle, rather than a tetra pack, which is no longer as respected as it used to be and which also made Frooti most instantly identifiable when it was launched for the first time. 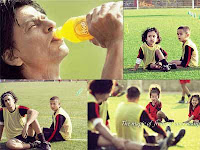 The Rs 1500 crore brand is ready to move to its next phase of growth, in a world filled with competitors like Coca-Cola's Maaza and PepsiCo's Slice on the one hand and carbonated beverages on the other. For instance getting on board one of the most recognised faces is being touted as the game changer for the 27-year old homegrown brand considering it has never resorted to getting a celebrity endorser before.

Feels marketing consultant Harish Bijoor, "Frooti's big strength is the fact that it has been around for donkey's years. It has become generic to the category altogether." This is a strength and a weakness as well, in his view, which the brand has to manage swiftly and carefully.

Nadia Chauhan Kurup, MD and CMO, Parle Agro agrees that the biggest challenge has been to get the magic back for a brand as old as Frooti. It's trying to combat some part of that challenge by getting the recognised face of Shahrukh Khan onboard. Frooti seems to be the last in the race to join the celeb-band wagon: the other players in the mango beverage space already have their ambassadors: Maaza features the pranks of Imran Khan and Parineeti Chopra while Slice has Katrina Kaif 's sensuous Aam Sutra moves.

The recent commercial shows a bunch of kids in a football field watching Shahrukh Khan gulping Frooti. He looks around when he is done and what he sees is a bunch of young adults whose longing for Frooti apparently has them lapse into a childlike state of wonder. He simply asks them 'what?' which snaps their reverie.

Shares Sajan Raj Kurup, founder and creative chairman, Creativeland Asia, "One of the key tasks in the brief was to capture the feel of relishing a bottle of Frooti and up the appetite quotient for the beverage." Even as the initial thoughts read more like 'oh no not again', Kurup wanted to create drool value purely through human emotions, reactions and expressions. Prakash Varma of Nirvana Films has directed the film. The team was very clear on how to use the celeb power of Khan without letting the brand get ambushed.

Shares Nadia Chauhan Kurup, "The campaign is breaking not just the category clutter or the advertising clutter, but it is even breaking the celebrity endorsement clutter." It is not often that SRK has been used in such a way where the only dialogue he gets to mouth is 'what?'" she says. When asked if he charged any lesser because he was made to talk less, she grins and shares how she wishes that it worked like that in which case "we would have just kept him silent." According to Satbir Singh, managing partner & chief creative officer, Havas Worldwide, "The usually talkative SRK quietly polishing off a bottle of Frooti makes it stick. Most agency and marketing teams would have him mouth a hundred words in praise of the brand." Studies have shown that culturally, kids and women prefer mango drinks just as the core audience for cola/ caffeine drinks (Mountain Dew, Red Bull etc) is men.

Alpana Parida, president, DY Works feels that this campaign reaches out to all ages and appeals to the child in men, to kids themselves and certainly the mothers who are both shoppers and consumers.It lifts the humble Frooti from a kiddie realm and will probably do more for the brand than all its past campaigns put together. According to Jitender Dabas, head of strategic planning, McCann Worldgroup, "A mango drink is about the pleasure of consuming mango and with this campaign Frooti seems to be coming back to its core." But is this the new positioning or just a commercial, is what he would like to know. 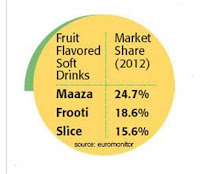 Along with the brand film, the marketing plan includes outdoors, BTL, mall activation, visibility at retail outlets (POP) and strong digital presence. Interestingly the first leg of this campaign was launched on the social media and as per Kurup in less than a week, its total timeline deliveries amounted to 52 million. It managed to garner over 8 million twitter handles and a whopping count of 80,000 tweets. Frooti's YouTube channel views increased by 2.5 million and subscribers increased by 600%.

Even as the brand spends 40% more on it's marketing this year compared to the last, it will have to quickly address one of its biggest weak spots — its relatively feeble presence in the returnable glass bottle (RGB) space. The returnable glass bottle is at the top in the pecking order of the caste system of packaging of soft drinks followed by the PET bottle and then the tetra pack at the bottom-rung, shares Bijoor.

This has been a pain-point that the brand is trying to tackle on a war-footing. Agrees and shares Nadia Chauhan Kurup, "Currently there are only four manufacturing plants for RGB which would eventually go up to 20 plants. The bottle form is one of the highest penetrated packing formats and there is a huge market for it." The glass bottle format has been launched in a phased way in some markets and would be increased soon as manufacturing capacity increases.

And perhaps that's what it will take for Frooti, the oldest brand in the category, to give a better account of itself in a growing market for mango beverages.