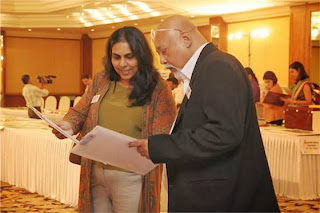 More than 1,200 samples received for the fifth edition of PrintWeek India Awards 2013 went under gruelling scrutiny of the 40-plus member jury at The Leela Hotel in Mumbai. In addition, for the first time, teaching staff from a print engineering college were also offered a sneak-peak at the Award process as they inspected the samples sent by 113 leading print companies of India. This helped the faculty to keep itself up-to-date about the latest and best in our country.
Last year, PrintWeek India Awards saw an ensemble of 334 entries from 116 companies –which were judged by an enthusiastic 30-member jury, an independent panel drawn from a wide-spectrum of print buyers, professionals and designers.
The jury drawn from the full spectrum of print discipline comprising print buyers, professional and designers were be split into groups to sift through entries in 19 Quality Awards and six Performance Awards categories.

Alpana Parida of DY Works, said, "I think there are over a 110 printers who participaited, which is brilliant. "I have always believed that for a piece of print to come alive, there should be a convergence of design aesthetics and print capability in terms of human skills in calibre and use of technology."
Vishakha Singh of Aurora Comm, complements Parida's statement.  Commenting on a screen printing sample, which took a painstaking 40 days for completion, she said, "It's an outstanding piece of work. The samples in the Wide-format, Poster and Fine Art categories were outstanding. I can see print's capabilities improve to an extent that it is now getting closest to the original."
“We were amazed by the quality and diversity of the entries which were sent in last year. This year's entries even surpassed the standards set  by the participating companies last year. It was pleasing to note, many of the entrants showcased impressive work, which demonstrates the gamut of capabilities that is possible with print,”  said Noel D'cunha, deputy editor, PrintWeek India and the brainchild behind the Awards.

Extending their support towards Awards 2013 are AGS, Bobst, Canon, Daya, Epson, Henkel, ITC PSPD, Roland DG, Skyscreen, Sona Commercial, Vinsak and Welbound Worldwide, who have come onboard as the category sponsors; whereas Dupont, EFL, Galaxy Propac, Quadtech and TechNova have extended their support as the Award partners.
Apart from category and award partners, Sona Commercial is supporting the Awards as the paper partner while Kala Jyothi is the print partner.
The PrintWeek India Awards Night is on Wednesday, 2 October 2013 at the Grand Hyatt, Santacruz in Mumbai. On the Award night, an august line-up of big-name print VIPs will attend the evening. In the fifth edition of the Awards, besides applauding Performance Awards and Quality Awards winners, the room of 350 persons will also be celebrating print on Gandhi Jayanti. 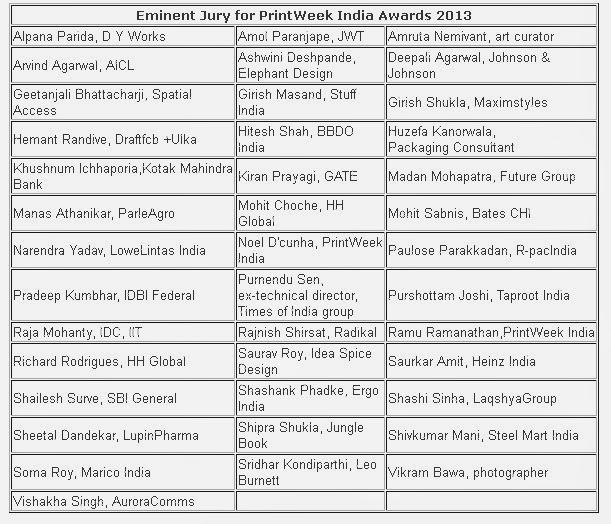 Alpana Parida is President, DY Works. She can be reached at alpana@dyworks.in
Posted by Unknown at 2:53 AM