Fast And Furious: How Fastrack managed to play sex card in advertisings

Remember the character of Akira Rai played by the ebullient Anushka Sharma in the 2012 release Jab Tak Hain Jaan? Many of the films viewers conclude she was the brightest spark in an otherwise morose caper. A girl who believed in breaking up over the phone without shedding any tears, was looking for no strings attached sex while also being the wholesome girl next door. Sort of like the young women and men of Fastrack. 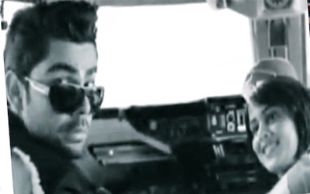 With racy ads and a product range that's very sharply youth focused, expanding from timepieces to sunglasses, bags and belts, it's built itself as an Indian youth icon of sorts, no 4 in Brand Equity's survey of Most Exciting Brands. And that in a relatively short time frame, even as former youth favourites with a bigger heritage like Flying Machine grapple with where they belong and how they need to get there.

Fastrack was known for bold product design but the audacious imagery is of a slightly more recent vintage. It was launched in 1998 as a sub-brand of Titan and was later spun off as an independent entity targeting the urban youth in 2005.

Ever since, the brand has added accessories like eye gear, bags, belts, wallets and wristbands and is betting big on the youth fashion space. "Very few new brands have succeeded in India — Fastrack is one of them. It has been the first to identify the 'Move On' generation and position to them," views Alpana Parida, president, DY Works, a marketing consultancy.

Edginess has been the key factor, according to Arun Iyer, national creative director, Lowe Lintas. He adds "one can't build an irreverent brand and be safe in the communication." Accordingly the tone of voice has been kept bold. Its advertising initially had Virat Kohli and Genelia D'Souza making mischief in various locations ranging from the elevator to the ATM to the airport counter.

Then they moved the action to the bedroom, and the parking area and explained 'why the world moved on' to typewriters and handbrakes. After a commercial ran into problems with TV channels, Fastrack quickly went online to drum up hype about this 'forbidden' film.

The final clip was rather innocuous: a girl taking her bra off while still wearing her t-shirt with the cheeky line '20% off can mean a lot'. And though it had a lot less skin on show than the average deo commercial, it made several people who would otherwise have watched the ad without batting an eyelid, eager voyeurs charged up to catch a glimpse of the 'film the channels didn't want us to see'. 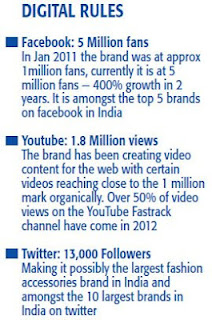 The tone of the ads over the last few years has been mischievous, just the right side of risque. In early 2012, the brand used digital as the lead medium for the first time to launch an entire collection called TEES. It had a combination of provocative visuals and girls admonishing people for staring at their T..s.

The hostel campaign for bags also created a furore as it showed a girl sneaking out of a boys' hostel after a night with her lover. A sequel to the ad had the same girl groping hot male passengers in a metro train. The use of young stars and a reversal of roles (and rules) made for a counter-culture offering in an otherwise polite and frequently dreary Indian brand universe.

Says Gupta, "Whatever Fastrack has put out there has always been aspirational and young. But above all it's always been believable. This makes it easy for the youth to relate." Adds Iyer, "For a brand like this we have to be thinking ahead of the curve rather than going by what the youth may feel as being currently cool."

An insight learnt in this journey has been that while it talks to the youth, many people who are not necessarily in that age bracket are using Fastrack too. It's a sign that the country is getting younger not just in age but mindset. Realising the propensity of its core target audience for the digital medium, Fastrack has been present extensively on it and is spending way above the industry average. Elaborates Vineet Gupta, managing partner of 22feet, digital agency on the brand, "Over the years, we have used the medium to influence every aspect of the marketing funnel — from engaging with our audience on a daily basis to generating conversations and awareness, to even launching new collections and activations with digital playing the lead role."

While the synchronicity between communication, packaging and product design has created an amazingly robust brand in Parida's view, what can be heightened is the in-store experience. It was in 2009 that Fastrack had opened its own stores positioned as a complete accessories destination. Currently it has over 125 showrooms, along with a presence in multibrand outlets. According to Vinay Bhatia, customer care associate and senior vice president - marketing and loyalty, Shoppers , "We are its top retailer in the country.

It has been consistently doing a double digit growth rate (CAGR) for us in last few years." Across the Tier I and Tier II cities, the brand is faring well and affordable entry price points have helped. In Bhatia's view, Fastrack is way ahead of category competition within the areas it operates in.

While it is good to have a footprint in all the spaces that the youth are excited about, the marketing head of a fashion brand, on condition of anonymity, points that it may actually be playing on a sticky wicket. Since it is competing in multiple segments and with many players, Fastrack could define the competition as coming from the various players in each of these categories or it could choose to believe there is no single challenger. The tipping point, many feel, could come from its overtly sexy positioning, which has got it noticed and has created ample anticipation but may pose a limitation in the long run. Explains Anup Vishwanthan, executive vice president, Leo Burnett, "The brand's aspirational value, creates a non-serious and frivolous image, which could corner it into a box when it gets ready to take the next leap." Going forward they will have to bring in certain values that would give them the stature, he adds, since the flip side of the entire 'move on' imagery could position Fastrack as lacking in depth and being irresponsible.

For now Fastrack seems to be having a free run with its target segment eating out of its palms. Who knows where the next extension could be coming from: a diverse set of possibilities ranging from funky helmets to equally funky condoms.


AlpanaParida is President of DY Works , a leading brand strategy and design firm.
Posted by Unknown at 8:39 PM