Brand Task:
The HUL Domex team wanted to communicate its new product feature i.e it turns from white to green during usage. This new product feature leads to perceptions of efficacy in the minds of the consumer.
To make the pack more engaging and informative, but not cluttering the packaging.
Brand Solution:
DY Works studied the product (toilet cleaner) category and found out that Domex is the most de-cluttered pack in the category. However the messaging hierarchy was amiss and communication cues were weak.
Some insights that DY Works gathered from the consumer research were implemented for the packing graphics as well .Like the brand identity and the core pack color (blue) were retained as the consumers identify with it. Further we decided to showcase graphically the Indian and western style commode which was clutter breaking in itself for the category.
We explicitly worked on the layout of the pack ensuring a systematic messaging hierarchy and to be able to highlight the new product feature via an active green formula (nomenclature) depicted by scientific mnemonic which works well with the imagery of the brand, ensuring its core claim of killing all germs dead.
We followed a balanced approach in designing the pack since there was a need to communicate the functional benefits upfront and thus it was a mixture of core facts and aesthetics. 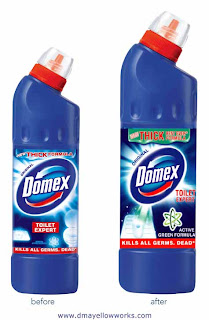