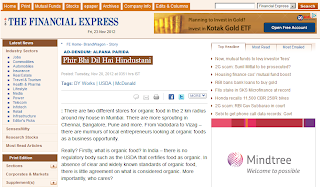 There are two different stores for organic food in the 2 km radius around my house in Mumbai. There are more sprouting in Chennai, Bangalore, Pune and more. From Vadodara to Vizag – there are murmurs of local entrepreneurs looking at organic foods as a business opportunity.

Really? Firstly, what is organic food? In India – there is no regulatory body such as the USDA that certifies food as organic. In absence of clear and widely known standards of organic food, there is little agreement on what is considered organic. More importantly, who cares?

For the Indian consumer, his/ her real worries are contaminated / sewage water used for irrigation, high level of pesticides used on the crop and perhaps genetically modified crops (ever since I read about porcine genes used for making fleshy potatoes—I am spooked!). The danger of bringing a foreign concept into India ‘as is’, is this: you can completely miss the real opportunity and can spend decades trying to educate a consumer rather than cater to their specific needs.

The so-called organic food industry would do well to call themselves ‘pesticide-free’ or ‘toxic-free’ rather than trying to force a nation to learn the meaning of organic.

For decades, the industry’s insistence on using the word ‘yoghurt’ instead of ‘curd’ or ‘dahi’ was mystifying. In the last few years, dairy brands have stumbled onto the incredible concept that consumers will be more responsive to the familiar!

But this learning does not seem to extend to the use of the word ‘pro-biotic’. What is it really? Every Indian knows that curd is good for digestion and curd rice is the easiest thing to digest – for babies to seniors. Would not a ‘super dahi’ or a ‘curd plus’ kind of nomenclature demystify this category?

Category after category—we see a rush to bring in foreign categories/ products/ brands to India—with barely a nod to local needs. But imported concepts do not translate into market successes and remain peripheral brands. To grow truly big— in a country such as ours—the answers need to be local. McDonald’s, Domino’s, Lays and others have all learnt the lessons of localisation with local flavours and cuisines becoming part of the local offering.

For others, the global dictates are so strong—that local opportunities are completely lost. For eons now, Harpic has been the overwhelming market leader in the toilet cleaner category. The closest challenger Domex is a distant second. It stays true to its global positioning of ‘germ kill’.

“Germs in the toilet” is not an Indian worry. Keeping it clean is. Preserving the increasingly upgraded bathroom’s pristine whiteness and caring for the marble and fancy ceramic fixtures is. Harpic is acid based. Domex contains bleach. One corrodes ceramic surfaces and ruins expensive fittings. The other maintains them continually. The word acid itself is full of negative connotations (think acid attacks and acid rain) and the other is a super cleaner. Nothing else. The opportunity for Domex to capitalise on its arch rival’s fundamental premise is enormous. Yet, it stands for ‘germ kill’ alone.

Thinking afresh is an imperative for Indian products. We were creating an Indian version of a pasta sauce for Mutti, one of Europe’s largest manufacturer of tomato products. While we ensured that the recipe was ‘Indian’ (higher sweet, salty and sour notes, greater spice levels)—we were assuming that the packaging format to be the same as it is globally—a glass jar. That is, till we conducted an ethnographic study of Indian kitchens and found that everything in jars—whether pickles, ghee or jam—came out by the spoon.

There was no behaviour whatsoever of a jar being overturned for a single use. Overturning a jar gave even the most affluent housewives a sense of over-use. To truly grow the pasta sauce market—we launched this product in pouches and market success validated the hypothesis.

Global products need to truly Indianise. Not just in terms of creating a local version of the same ads— but finding a deeper relevance for the Indian consumer in terms of positioning, naming and building in cultural cues that make the products relevant to India. The market size for “pesticide-free vegetables” is exponentially larger than “organic produce”.

The author is president, DY Works. She can be reached at alpana@dyworks.in
Posted by Devatanu Banerjee at 9:00 AM

Email ThisBlogThis!Share to TwitterShare to FacebookShare to Pinterest
Labels: back of pack, indianization, organic, press, probiotic