When the realty bug bites … 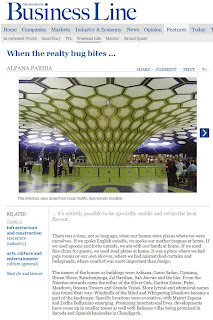 … it’s entirely possible to be upwardly mobile and retain the local flavour.

The names of the homes or buildings were Ashiana, Gauri Sadan, Upasana, Diwan Shree, Kanchenjunga, Jal Darshan, Sah Jeevan and the like. From the Nineties onwards came the influx of the Silver Oak, Garden Estate, Palm Meadows, Oceana Towers and Grande Vistas. More lyrical and whimsical names also found their way: Windmills of the Mind and Whispering Meadows became a part of the landscape. Specific locations were evocative, with Mantri Espana and Lodha Bellissimo emerging. Promising international lives, developments have come up in smaller towns as well with Balinese villas being promised in Baroda and Spanish haciendas in Chandigarh.

In less than a generation, we are living lives international. Our homes are no longer the places we celebrate our traditional lifestyles, the one refuge where we can be ourselves. They are places where we flaunt our international tastes and aspirations, where no mismatched décor exists and our interiors are as much statements of style as our clothing is.

We, however, remain proud Indians. We celebrate our cinema, enjoy our music, dance to the bhangra and follow our rituals. So how does this dichotomy exist? How do we explain this exuberant chasing of Western lives with such Indian hearts?

For one, we are fed up of the squalor around us. We are fed up of things that don't work and systems that break down. We long for the escape to international destinations but we no longer want to run away there. There is enough and more in the fabric of Indian culture and the robustness of the Indian economy to moor us here. We simply want to bring the experience here. On our turf, on our terms. And live in bubbles constructed to keep the chaos of India out of carefully crafted realities.

The rise and rise of the new gated communities is the success of this bubble that allows for an escape from the squalor of India.

While the real estate developers have got that right, they all seem to be doing the same thing.

The images appear empty and perhaps they work as the Indian consumer is looking to escape from the jostling crowds outside.

The escape in the gated bubble has become a category promise and real estate brands will have to go beyond that to differentiate. Perhaps they need to channel learnings from other categories, such as the hotels and hospitality business.

Hotels have stood as symbols of luxury long before real estate made the claim. Taj, Oberoi or even the State-owned Ashoka offered islands of luxury. And cloistered spaces that kept the world out. They borrowed heavily from local influences and yet kept a global language. Chettinad, Kerala or Rajasthani, local architecture, art and names dominate the hotel industry.

Other countries see successful elements of local art and architecture incorporated. We are proud Indians. We value our heritage and customs. Real estate brands that leverage that insight would be able create robust, differentiated brands.

The Abu Dhabi airport borrows from the sand dunes of Arabia to create a unique structure. The interiors are also inspired by local motifs, and create a perfect juxtaposition of the modern with the local.

When we had worked on a property being developed by Tata Realty and Infrastructure Ltd (TRIL), located on the Kochi Marine Drive, we found a local culture that took great pride in its roots.

We convinced TRIL that they should celebrate the local culture, and the property, located at the confluence of the sea, land and sky was called Tritvam.

There is a huge opportunity for real estate developers to maximise the appeal of their properties by keeping the codes of luxury spaces that are gated communities, but also by borrowing from local sensibilities.

(Alpana Parida is president of DY Works. The views expressed are personal.)
Posted by Devatanu Banerjee at 6:09 AM