SEMIOTICS OF THE BINDU: ONE FULL CIRCLE

Bindu. One could argue that an article, especially one on semiotics, should probably not begin with a dot. However the 'bindu' is no full stop. Yes! It is simple but it is profound. It is as superficial as an embellishment but also as inherent as the soul. It is self contained, yet diverse. It is exactly why I thought the analysis of this mark, taken so for granted in a country inundated with culture, would make for an interesting ‘point’on semiotics as well as a fascinating analogy with brands.

In India the bindu is omnipresent - whether it be a chandra bindu in the devnagari script or a tikka on the forehead. Something as simple as a dot takes different meanings with its multiple shapes, sizes and colors. For instance, in an Indian soap opera the slightest variation of the bindu defines the deadliness of the vamp. It subliminally changes people’s perceptions of good and bad. So in the context of brands, could one say that what the bindu does to the woman is what a logo does to a brand? The answer is yes, if you look at it as superficially as an embellishment. The answer has more layers as one explores the different layers associated with this deep-rooted symbol.

My first realization of the 'essence' of the Bindu was as a painting by French based, Indian painter, S.H.Raza titled 'Ma Laut Ke Aunga Toh Kya Launga' (Mother when I return, what should I bring you?). As an audience of age 8, what appeared as a black circle, evolved (with what I'd like to believe was my evolved sensibility) to take multitude forms. It formed a whole. A solid black circle encompassed half the canvas. Was it the womb of a pregnant woman? Or was it the symbol of the Bindu that one immediately associated with a quintessential Indian Mother? It was the containment of energy, the central point of emergence and a unit that preceded life. Raza himself calls the Bindu the 'seed' bearing the potential of all life. He says 'Bindu Ki Anant Sambhavnaye' (The multiple forms of the Bindu). It is through the eyes of a painter that I noticed the multiple dimensions of the Bindu. 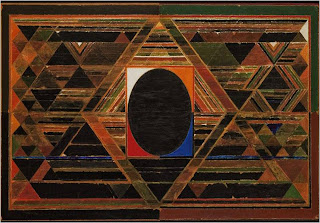 It was the mere influence of the Bindu that gave the heavily French influenced painter an Indian soul. It gave the Indian audience a reason to believe in him and created an immediate emotional connect. Beyond the top layer of the painting, I began to see what Anjolie Ela Menon calls 'Pentimento', and M.F. Husain called 'birthmarks' - the lines still visible under the top layer of paint. It is what is visible but still absent. It contributes to the end product but deliberately takes a back seat. What earlier the layman would call marks that the artist forgot to cover up actually form the complete picture -a picture that fetches millions of dollars today.

So before I digress from semiotics- into my evident passion for art, you may ask what has the bindu to do with brands? At DY Works it all came back 'full circle' - pun intended! I realized its how we look at brands. It’s a simple way to build and envisage million dollar brands. What we call the brand seed gives the brand an essence; just like the bindu does to the various canvases, foreheads and scripts it prevails in. It can change the origin story of a painter, it can change the perception from positive to negative and vice versa, it can even change the way you pronounce a word in various languages.

And what is the reference to pentimento to do with all this? Semiotics is our pentimento at DY Works. It forms an integral part of the process, explicit enough to be noticed but subtle enough to take the back seat. It is what differentiates one from the other, it is the inherent core that builds the brand and lends immense character. It is not just about glossy color palettes, fancy fonts and what the layman would assume is a brand - the logo. It adds layers to the brand, making it identifiable, acceptable and rooted within cultures.

In Hinduism, the bindu is believed to be the point where energy exits the body. It contains and preserves this energy. It provides focus, aids concentration and balances temperament. Similar to the shape of zero, the original form of the bindu is an underrated geometric shape that provides a 360-degree view as a third eye. It is grossly underrated but very easily adds value. Can a brand do that? In my opinion it should. And for those semiotic geeks who have not had enough – I will try and be 'semiotically correct' by tying the close of the article with the beginning. With a 'Bindu'.